It is reasonable to assume that both patient follow-up compliance as well as implant survival/success rates could be expected to be higher when reporting results from small, well controlled prospective efficacy studies, as compared to results from large, retrospective effectiveness studies, based on routine clinical performance. Thus, data using patients and dentists that are enthusiastic pioneers when using new clinical protocols or take part in prospective studies where the follow- up examinations per se become important parts of the treatment may result into better clinical results and higher follow-up compliance than following up patients in more routine situations. This assumption could be supported by comparing literature reviews on for example, implant surgical loading protocols based on studies comprising only prospective randomized studies6 with reviews based on both prospective and retrospective studies, indicating better and smaller differences between results when using prospective study protocols.

Based on this assumption, comparisons between results from efficacy studies and effectiveness studies could allow for an assessment of the robustness of a clinical protocol, where a small difference could indicate a robust technique while a larger difference could indicate a more technique sensitive protocol. The different results discussed above could make a good example for this assumption, indicating a more biological and secure approach in routine treatment when using a two-stage surgical protocol as compared to an immediate placement/ loading protocol.

Implant failure is based on clinical and radiographic information which is a clear and easy endpoint to study and report. The only factor to discuss may be where the cut-off time-point should be placed after implant surgery, separating “early” from “late” implant failures, resulting into either slightly under- or over-estimation of the two different observations. Irrespective of where the cut-off time-point is placed, clinical follow-up studies have shown that most dental implants are lost early after implant surgery during establishing of osseointegration and early function.9 Thereafter, the clinical objective is to maintain established osseointegration and to try to maintain a biological healthy situation without severe mucosal inflammation, bone loss at the implant or loss of osseointegration. Long-term experience of implant treatment has been encouraging with few implant failures during periods of 10-20 years or even longer.However, even though no obvious trend of increasing implant failure rates over time has been observed yet,much attention has lately been focused on mucosa health and bone loss at the implants, referred to as “peri-implantitis 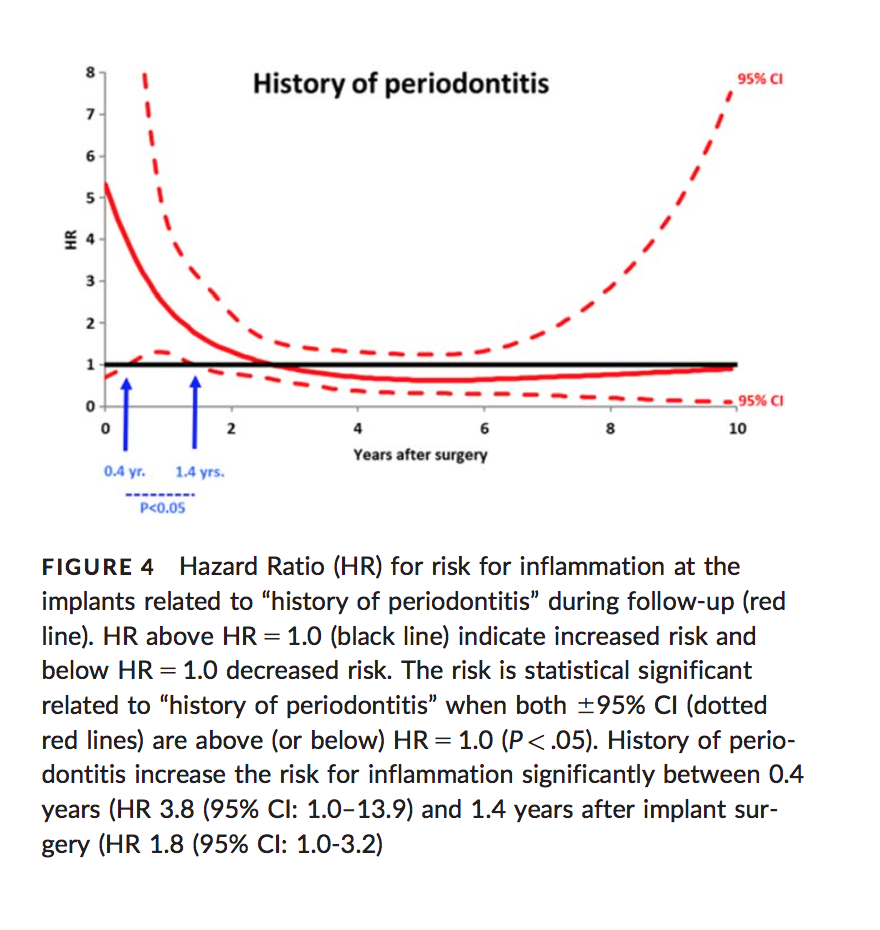